The Bitcoin is a short by the author going by the moniker, Delicious Tacos. It’s also taking over this first Storytime Saturday because it captures that compulsive obsessiveness behind fast, high risk investments; it has a fun relevance with bitcoin’s recent inflation; and because of its surprise horror. (In fact the horror element’s so subversive that I don’t even like reminding readers it’s there, so let’s pay attention to this thought instead.)

While The Bitcoin does carry a couple of punctuation and tag choices that reminds its audience that they’re reading (in general, tags = easy immersion-killers) its writing still has this definite “reads-like-water” element that makes it stand out and fun. So maybe it’s this tale’s seediness (D.T.’s clearly comfortable with tasteful vulgarity) or the fact that I think fiery stories about cryptocurrency sales are worth a few moments, but I really liked this one.

(You can read more from Delicious Tacos’ twisted mind at www.delicioustacos.com, and he’s got a book bearing the super politically-correct title, The Pussy, put together, in part, by an LA-based print collective, Vandal Press.) 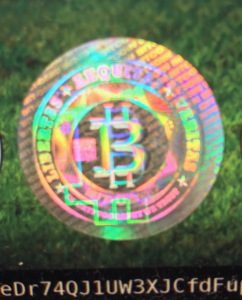 Friday he got off late from the coffee shop. Had to walk up the hobo alley off Abbott Kinney in the dark, to the residential street where he’d parked his Mercury Topaz. Work lot for customers, only. Rough day, but they all were. Gloria the goth cashier girl called in sick. He had to cover. He had a crush on her but she was dating some guy in a band. A state worker out of South Carolina had called, threatening a fine. The dishwasher had fathered kids there and he’d forgotten to file the wage garnishment. In his hand, in a clear gallon freezer bag, the now day-old vegan almond flour blueberry muffins. No time to cook, but it was something.

Suddenly behind a trash heap something moved. He felt his hands raising up, although he couldn’t box. Rats scattered and a coke Zero bottle rolled half cocked over the concrete with a sound like a door knocker. A strange voice rattling off the dumpsters.

“I see you have more food than you need, sir.”

“Go fuck yourself,” he said.

“And what,” said the voice, behind him now “if I were to give you something in return?”

He turned. There on a piss stained twin size mattress with BEDBUGS spray-painted under skull and crossbones, an old man sat Indian style. He wore black rags, black boots; white hair, brown teeth, and in his hand a bamboo cane with a brass serpent head whose eyes caught the moonlight malevolently. His skin like a coal miner daguerreotype. But in his gaze, something young….

“I see you’re not an unreasonable young man.”

“What are you gonna give me, fuckin cans? Here, I’ll give you a muffin. Sorry for being a dick, hard day–”

“Oh no! I couldn’t take a handout. Where’s the honor in that? I will trade you. A gift for a gift. Your bag there, for this.” He reached into a vest pocket with fingers impossibly long, all soot black tendons, and waved, with a flourish, what might have been a Costco card.

“Did you steal someone’s credit card?”

The man mimed a hurt look. “Oh no, sir. I am no thief. This was a gift, from a visionary man. And now mayhap it shall be yours.”

“A bitcoin! This card has upon it a code for a most fantastical financial instrument sir- a crypto-currency!”

“What price is a miracle, sir? This bitcoin and others like it will revolutionize the world! No more banks! No more thieves, or money changers in the temple. The miracle on this card will enable seamless, private peer-to-peer fiscal transactions, any time, anywhere, built upon blockchain technology-“

He handed off the bag, reached out, grabbed the card. Stalked off to the Topaz as the moon glowered through the smog and the old man laughed savagely in the growing distance through a mouthful of muffin. At home he put a pot on the stove for ramen. Threw the card in a drawer.

A year passed. He was at the airport, back from the funeral. Screens of CNBC played over an Irish bar. A bald man with a face like a muppet gestured excitedly. He couldn’t hear over the PA telling disabled guests to please board now, but the chyron said:

Oh shit, he thought. Is that thing worth a thousand bucks?

He never threw anything out. Digging through the drawer, carpet covered now with old insurance bills, Christmas cards from people long dead, letters from some law firm telling him he was part of a class action suit against an air bag company. The faces of several Topaz drivers had been vaporized by shrapnel. Old polaroids of his cat, which almost made him cry. And there it was. The bitcoin.

The card was dark green to black, weird numbers and symbols half worn off now. On the front was the hologram and a web address. Below that a long chain of letters, numbers. He plugged in the url. The site asked for the code. He typed :

A new page popped up. Your Portfolio, it said: 1 Bitcoin.

The flames rose, the warm orange light scaled up the white screen and danced. Higher, always higher. He could swear the fires felt warm on his face. He leaned closer. It was true- heat! And the light, the warm color, sunset over the sea, gulls crying. Warm soft sand under his bare feet, the sea foam kissing his toes as the waves climbed… warm like the womb. A beach somewhere, Southeast Asia maybe. He turned and a golden girl in a white sarong strolled toward him in the distant fog. Coal black hair whipping in the sea breeze as he could almost, almost see her face smiling and the flames danced down and the white glare hurt his eyes and he was back in his room. $980.75. Jesus Christ, he thought– I better go to bed.

He held his coin. Didn’t look for six months. Until one day he remembered the beach. The girl.

$3286 now. Five grand must be next, he thought. He squinted at the fire shapes in the price graph. The warm orange dipped and spiked. He waited. $3272. $3276. Nothing was happening. He must have been tired–

Then there it was. Mediterranean sunset through a wide windshield, green hills whipping past in the periphery. The yellow line streaking impossibly like tracer fire. A sound like a bull bellowing, like God’s lawnmower. Steering wheel in his hands. He could barely see the hood but it was red– it was a Lamborghini. Like the Countache he’d had on a poster as a boy, parked askew in a cobblestone alley in Milan somewhere. Mounted above Castle Grayskull. The speed made his hands sweat but the steering wheel was wrapped in soft calfskin and his wrists made the turns like a dance they knew. Two hundred miles an hour. There was a squeal to his right. He looked and there she was. The girl. Her face like a Chinese ad for hand cream. Shrieking and clinging to the door grip, eyes wide but smiling.

Jenny had thought the car impractical. It cost as much as a house. But she didn’t have a problem now.

He slowed down, pulled over. Felt the brakes bite and heard the roadside gravel pinging on the undercarriage. Even that sound, like something from a symphony.

“We’ll get another one.”

“Baby I will never be mad at you.”

And she leaned across the camel colored hand tooled center console to kiss him, hair tickling his collarbones as white clouds closed in and a hiss woke him up. $2998.

Gloria the goth girl came into the back office as he was counting out the drawers to close.

“Hey can I ask you something,” she said.

It was almost payday. He put it all into the bitcoin now. It grew and grew. At $5,000 the flames showed him a mansion. New rooms folded out from the void as the fire danced. The red Lambo in the driveway. The girls came and went. A shrewd financial wizard such as himself rarely lacked for company. But he always thought about Jenny.

“You know I broke up with James.”

He looked up. She had a pleated skirt on and underneath a tattoo of something. Possibly Satanic. He’d been studying her thighs for two years but hadn’t noticed it. It looked ghoulish in the blue light of the office TV, which played CNBC. She was into him now. He could tell. Girls looked back at him on the street, since it. Since her.

“No it’s good. Anyway listen– a bunch of us are going to Catalina this weekend camping. Do you want to come with?”

He looked at her again. “Is it expensive?”

“THIS COULD HIT TEN THOUSAND, A HUNDRED THOUSAND, A MILLION JEFF. THERE IS NO LIMIT TO–” eccentric millionaire John McAfee suddenly boomed from CNBC. His skin, like a 120 year old opossum but, there was also something young in his gaze.

Before he logged in he tied his robe and poured champagne. Cast a glance at 4chan/biz. Murmured a quick prayer to the money gods. Hit enter.

$11,121. $12,364. The fire filled the screen and it felt like it made hands that pulled him in. Now he was coming home. Jenny swung open the big double doors when she heard his loafers on the stone steps. Above and behind her MC Escher stairways twisted up into ceilings with Michelangelo angels that had his face. “Where have you been,” she said. “I missed you.”

“I had to work baby. I got out late. This girl was talking, wanted me to go camping.”

“Is she prettier than me?”

He looked at her. She was on the verge of tears. Eyes, like a baby faun’s.

“No girl is prettier than you.”

“I have something to ask you, he said. And began to reach in his pocket.”

She said, “yes, oh yes. And held him. Promise you’ll never leave me,” she said.

“I promise,” he said. “I promise. I love you.” She kissed him. Fingers hot on his back the fire shivered.

On Christmas they found a corpse, hunched at the desk with its dick in its hand.