Humans will be living a lot longer. 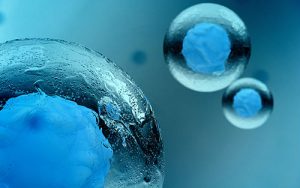 Stem cells, the nakedess cell there is, have amazing potential when it comes to healing, transplant surgery, and way more. In a way, they’re ancestral cells from which the rest of our cells proliferate.

Japan was leading the way in stem cell research, but it was a little scarier (and Resident Evil-ish, if you want to take it there) in that their research breakthroughs involved viral mechanisms to break down the programming of skin cells – that is to say, the stuff that tells the skin cell to be a skin cell – which degenerates them back into a stem cell.

But now we have something better, thanks to Australia:

They’ve got a group of researchers who’ve shown the ability to develop stem cells FROM BONE AND FAT CELLS. As I’m a yankee, I have a hard time believing that’s something we have in mega-short supply. They’re also able to do this without viral loading, but with two chemicals (I believe one is a catalyst, and the other’s a hormone: 5-Azacytidine and Factor-AB for geeks who want to be specific) which follows a similar (but different) transition course which, over weeks, tells those cell to revert back into a specialized stem cell that’s just so goddang flexible. Science press articles might as well start calling it “Body putty” cause results (called iMS cells) are sold like you can slap these cells into your spine, and presto-chango! Instant nerve repair.

It wont work exactly like that, but still, frikkin amazing.

And my silly way of thinking makes me wonder, if we learned about viruses and turned ghouls into zombies…
What’s next?

Because every year, in terms of scientific capability, it’s still fair to say that humans are advancing faster than ever. So just how many science fiction stories will need to find a new category?